skip to main | skip to sidebar
I’ve been doing so much throwing away lately. The sorting and sifting, the trips to the dump, to the charity shop, bags of stuff, and the fear always that I’ll throw out something irreplaceable.

I was in the attic looking for a suitcase when I came across it, in a box of old letters and school reports, a soft toy called Piglet I had as a baby. And, wrapped in a plastic bag, two cornflake packets stuck together with tape. A handle of string. How long has this been here? And I remember. This dusty block of cardboard like a time bomb exploding a whole era in me.

Amazing. A little window opens up in time and I feel I could step right through. That kid I called Pipsqueak who had such a crush on me. Us cutting and sticking and wrestling in his basement room - at fourteen, a last burst of pure playfulness in the midst of adolescence.
Lost all touch with him after that.

I dusted off the box and took it to the kitchen table. The sellotape holding it together was yellowed and brittle, the glued on drawings faded, the balsa wood and cotton reel knobs no longer properly attached, but it still had the earphone from an old transistor radio plugged into its side. I put it to my ear. Amazing. Unlike any iPod, there’s an infinite choice of sounds not to hear. 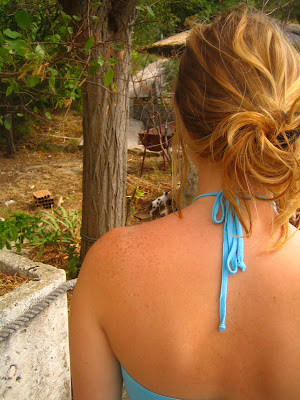 I also found some pictures Barry took of me then, bare chested, pouting and spotty. He was petrified when he found out how young I was. Which was a shame because snogging sweet, stubbly Barry was delicious, I remember. No wonder I fell madly in love with him when he showed up at our shared house in Sheffield years later. Amazing he’d survived after all those drugs he was ingesting then – so many of our generation didn’t. But by then he’d dropped photography and psychedelics to be a Reichian therapist, his pasty body his temple. It wasn’t such a big step from there to being a personal trainer of thrusting young yuppies. And from that into futurism. He told our friends he was conning the capitalists, but actually he took it pretty seriously, was good at the buzzwords and whatever. Oh yes, always a trend-surfer, my husband, my happy, hopeless husband, my beautiful Barry.